Ankhegs, what are they and how to use them.

Imagine being  snapped in half by an ant the size of a cow. That is what you get when you step on a Ankheg’s burrow. – The Gnomes Guide To Gardening 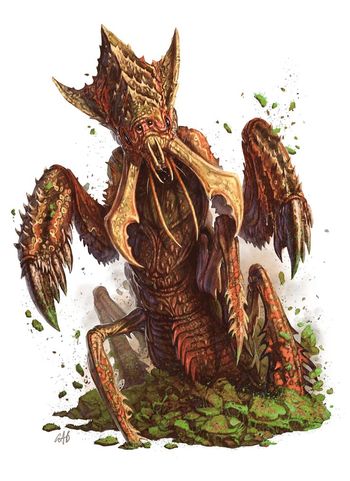 The Ankheg is an enormous insect who hunts grasslands and forests. Laying an ambush for its prey it attacks from below using its sharp hooks to grapple his opponent. Once it has you in its grasp it secretes acidic digestive enzymes dissolving its victim thus making the remaining body easier to swallow.

It is not unheard of that a farmer uses an Ankheg to help its land stay fertile. Adapt armorers can even make armor from its shell that almost matches the protection of full plate armor. Armor like that is expensive, rich nobles pay as much as 20.000 GP for an Ankheg armor set. Seems a bit much? Well if you provide the shell yourself the craftsmen might give you a nice discount.

Below you’ll find an Ankheg encounter for every tier of play, enjoy.

Ambush: As the party is travelling through the forest the character walking in front feels his foot sinking into the ground  make a dexterity DC 12 save. On a success he pulls back in time. On a fail he falls prone 5 feet below into a tunnel, in front of you stands a giant insect ready to attack roll for initiative. If the characters don’t fall in the tunnel the Ankheg will attack a few moments later on the DM’s queue. If the characters did not prepare themselves he gets a surprise round.

This encounter can be very deadly for first (and second) level characters. An average bite attack does 12 damage and grapples its foe. For this reason I do not give a surprise round when someone falls into the Ankhegs burrow. If you use it on a higher level group you can punish your players a bit harder.

Mating ground: As the party is travelling through the woods they hear strange noises coming from over the hill in front of them. If the characters just keep on walking they will find themselves interrupting a mating ceremony. Seven male Ankheg are dancing around a female and guess what they don’t like to be interrupted. If they come within 60 feet the party is spotted and they attack. If they stay further away let them make a stealth check.

This encounter can be completely be avoided by going around the mating ground. Be aware 8 enemies can be overwhelming for some parties but you can always increase their numbers to make it more challenging.

IT’S IN THE BASEMENT: During the night the building (inn/farm) the party is sleeping in partially sinks into a tunnel. The owner knew of the Ankheg but kept him there to fertilize his grounds. What the owner did not know is that Ankheg can brood up to 12 young a year. The lower floor of the building is infested with the mother and its young. If some guests or patrons were sleeping they are in danger!

If you use this encounter remember that they probably don’t wear their armor at night. Three Ankheg per PC should be a big enough challenge.

If you want to make it a bit easier for the PC’s you can let the pass a farm on the road where this attack has just started.

Hive Mind: For a few weeks there has been no news from the towns to the south. Scouts send there have not returned so someone hires/ask’s the PC’s to investigated (or maybe they know a NPC in one of the towns).

Upon arrival in the town they find it totally abandoned. Investigation leads to believe all the villagers were taken. Tracks can be found leading into the forest (or any other place that fits your world). When they follow the tracks they might encounter a small group of Ankheg. The end of the trail brings them tho a giant pile of dirt. An ant hill for Ankheg. 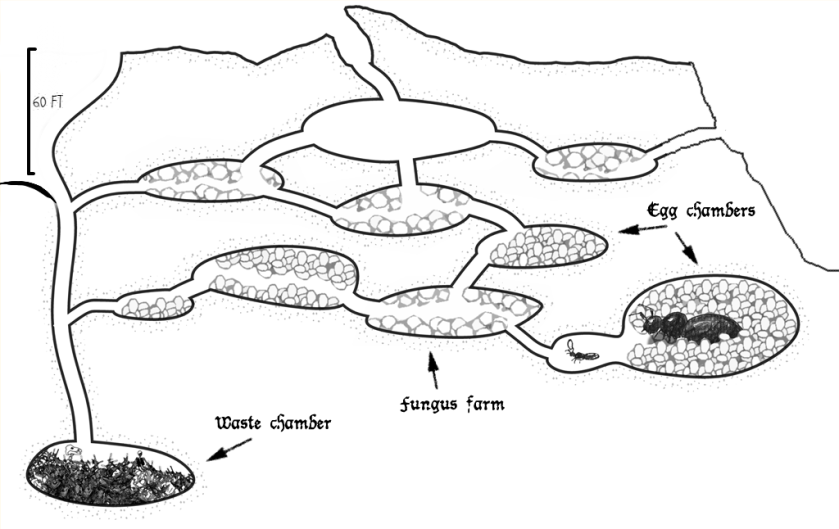 The colony is filled with Ankheg, since the queen lays about 10 eggs a day which hatch after only 1 week its population grows at an immense speed. The queen uses her children to protect her, once a week she can lay a special egg to hatch a royal guard. Currently there are 3 royal guards in the lair, at least one of them stays at the queens side at all times.

At epic tier the PC’s should not just have small encounters so here I present a way you could do it. If they do not solve this problem the colony will only expand. The queen might hatch a king who can create more queens in his turn and so on.

In the lair make sure the trow a lot of Ankheg at the PC’s but not all at the same time. It should be a battle from the way in until they kill the queen. Once she is dead most of the surviving Ankheg will flee or just go into a deep rage.

I hope you enjoyed my first encounter compendium post, please let me know what you think and where I could improve.

Ecology of the Ankheg

5 thoughts on “Ankheg: Dead From Below”